Market gardening shaped the landscape and economy in the Vale of Evesham from the 19th to mid-20th century, but due to much of this heritage and knowledge being lost a project has been underway to record, share and celebrate it before it’s too late. The key focus of this two year National Lottery Heritage Fund project is memories and buildings.

In order to preserve a record for future generations, a survey has been carried out of surviving market garden buildings, three ‘hovels’ restored as heritage sites, local memories recorded and a programme of public events and displays held. Early in 2021, the project’s digital resource pack for local schools will be launched, followed by a reminiscence pack, touring exhibition and final open day. These events have been postponed from 2020 and will hopefully be held in the spring, once safe to do so.

At one time, most of the population around Evesham and Pershore were employed in market gardening, and a wide variety of vegetables, fruit, herbs and cut flowers were sold at markets up and down the country. As all gardeners know, a shed is essential for storing equipment, produce and providing shelter. Market gardening was no exception: rows of timber, corrugated iron and occasionally brick built structures once lined the ends of their grounds. Generally built to market gardeners own design and requirements, each was unique in both design and function. Alongside doubling up as temporary accommodation for hired hands, some were also used for keeping racing pigeons or brewing homemade alcohol, and one even served as a monthly barber’s shop!

Since the rise of commercial horticulture and decline of market gardening during the latter half of the 20th century, these small buildings, locally known as ‘hovels’, have been slowly disappearing – it is thought that over 80% have already gone. A survey to record surviving hovels within 20 Vale parishes is almost complete, thanks to the work of dedicated volunteers. Once collated, the photographic and written information gathered will be added to the publicly accessible Historic Environment Record for Worcestershire.

There are more details on the WASS Website and they do provide a schools pack for teachers to use in lessons about Market Gardening in the Vale.

The project has focused on many aspects of market gardening in the Vale, but no more so than a tiny shed discovered in the corner of a field in Cleeve Prior, still full of the old artefacts as the last occupier left it some thirty years ago. The shed, better known as a “Hovel” was last used by a local man Edgar Wheeler, and the project has interviewed many friends and relatives to build up a picture of the man himself.

It was important throughout the project to share with the community the story, especially when we were looking for more information about Edgar Wheeler, whose Hovel in Cleeve Prior has now been restored as a time capsule. We were very generously supported in this role by the Cotswold & Vale Magazine , who ran a series of articles over a two year period.

There were three interesting articles, reproduced here by kind permission of the Cotswold & Vale Magazine, who retain the copyright:

Here’s something a little unusual for #WorldPoetryDay – a chance to hear the old Evesham dialect, Asum Grammar. Curious? Have a listen! See if you can work out what these market gardeners have got mixed up with a sunny tropical island…

The Cleeve Prior Hovel has now been set up as a time capsule with all the old artefacts  cleaned , catalogued and put back in their original positions 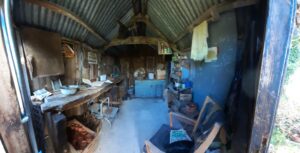