Details of all Services

Please see the current Parish Magazine via this link 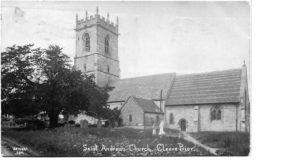 The Parish is called Cleeve Prior from its close association with the Priors of Worcester Cathedral, the Prior & Chapter having been Lords of the Manor from the year 872, when Ethelred, elder brother of King Alfred, was king, until the Ecclesiastical Commissioners took their place and revenues in 1859. No doubt there was a church here in 872, and mention is made of the village priest in “The Doomsday Book” in 1086

To this latter period belong the north and south round headed Norman doorways. The church was formerly cruciform, the south Transept being built on the site of an earlier Transept.

The Nave is 13th century, and the old roof with its regular, twisted beams is worth noticing. The lancet windows appear to be of the same period, and in the north-east window of the Nave are two fragments of 15th Century glass. The older pew-ends are 14th century, as is probably the Font, although this has a much older, original base. The Chancel was added, probably in the 14th century, when the Norman apse would have been removed.  Note the old piscine in the south wall. The Chancel was last restored in 1863.

The Tower, which is 68ft 7ins from the ground to the battlements, and which has 90 steps in the stairs to the roof, is notable for its batwing gargoyles, crockets, canopies, battlements and pinnacles, and is 15th century. The Elm Chest which is 8ft long and hewn from one tree trunk, is probably 14th century. It was for a time used as a potato bin in the farmhouse of a former church warden. The minstrels gallery, where once was used a barrel organ, and where the Church Band would have sat, was removed in 1858. In 1960 extensive repair and restoration of the top of the Tower was carried out at a cost of nearly £5000. The clock was placed on the tower to commemorate Queen Victoria’s Diamond Jubilee in 1899, at a cost of £166. In 1978 cleaning and overhaul of the clock was undertaken at a cost of over £400, which was met by a gift from the parish council and voluntary subscriptions from parishioners.

There are six bells, four of which were cast by Henry Bagley of Chalcomb and installed in 1658. The third was recast by Richard Sanders of Bromsgrove in 1722. The bells were turned, tuned and rehung on an iron frame in 1927 by Messrs. Mears and Stainbank at a cost of £333, having been previously rehung on their old wooden frame, in 1888 at a cost of £34, and again in 1906 at accost of £33. In 1950 two “Peace” bells were added.

The Church Registers date from 1598, and the Church-wardens names are recorded from 1658. The names of the vicars of the parish, recorded unbroken from 1306, are to be found on the west wall of the South Transept. In olden times the Vicars used to give a peahen yearly to the Prior of Worcester. Also in the South Transept will be found a very interesting and beautifully executed pictorial survey of the village, drawn and painted by Mrs Audrey Baylis, the wife of one of the Churchwardens of the time in 1970.

The silver communion Plate is of 1729 and 1858, and there are also old pewter alms dishes and a flagon.

On the outside of the Church there are marks made by archers on the south-west buttress of the tower, where they sharpened their arrows in the middle ages. South of the tower there is a tombstone in the memory of one, Sara Charlett, who died in 1693, aged “309”. There are the faint remains of a scratchdial, or sundial, on a buttress of the south wall of the Chancel. The Churchyard was consecrated on the 18th October, 1315, and the yew tree near the south door may well be 600 years old.

If you a researching the graves of your relatives buried in the church yard prior to the1980’s,  a project completed by a villager,  10 year old Oliver Newman in 1983, may help you in you search.

Press this link to load up the file and on the view tab, switch on the navigation page, which will bring ups a list of family names. This will take you to the details of individual graves and the wording on each, referencing their location to the plan below. 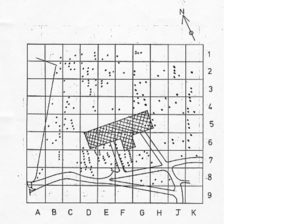 Childrens art to commemorate the end of the Great War 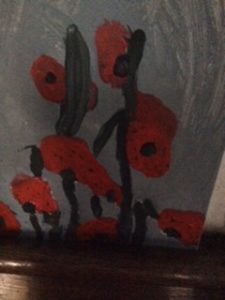 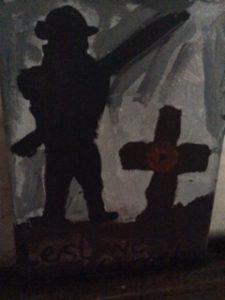 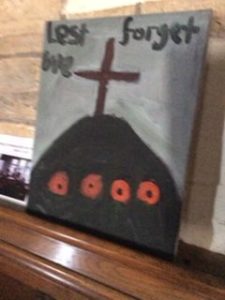 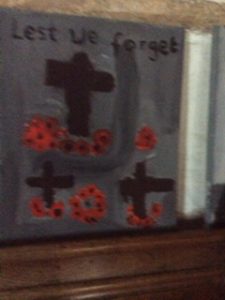 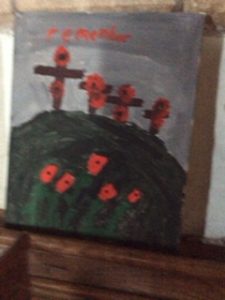 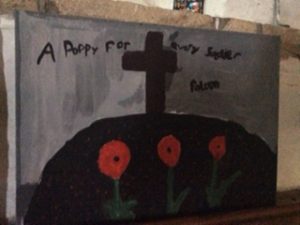