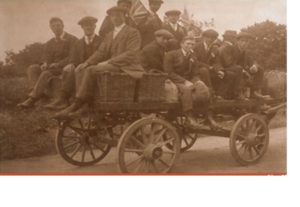 There were 11 of the soldiers who left  from Cleeve Prior who did not turn at the end of hostilities. 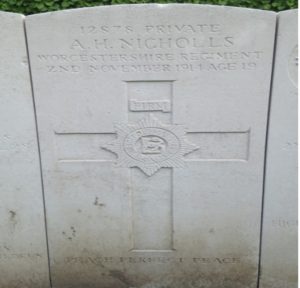 Harry Nicholls was a career soldier and went over with the British Expiditionary Force to Belgium in the second week of August, by the end of October the second Worcs battalion once around 1000 strong was now numbering 370 men.

They were being held in reserve in Polygon Wood to cover the Gheluvelt sector which is to the East of Ypres, where the Germans with  superiority of numbers managed to breach the front line at Gheluvelt village and Chateau.

To fill the breach the Worcestershire 2nd Battalion were sent in to attack Gheluvelt Chateau, at the double, in order to get over the exposed ground as quickly as possible. In the process they lost  100 men either killed or wounded by high explosive or shrapnel shells, and more men were lost in the ensuing hand to hand fighting. They charged into the somewhat surprised German troops and after a fierce struggle put them to flight, they then managed to link up with the South Wales Borderers to their right and the Scots Guards to their left and the front line was secured.

In closing the line against terrific odds the 2nd Worcestershire’s came in for special praise from the British commander in Chief Sir John French. The British papers were full of praise for the gallantry of the men and the headlines read  ‘Worcestershire’s Save the Empire’  Out of the 370 men who carried out the attack a further 192 were casualties of which Harry Nicholls was one.  He was severely injured in the attack and taken back to Poperinghe where he subsequently died of his wounds on the 2nd November 1914.

He is buried at the Poperinge Old Miltary Cemetery in the middle of the town.

The second  soldier from the village  to loose his life was James Spiers. We have been unable to find out the exact circumstances of his death which fell on the opening day of the Battle of Loos, due to the casualty figures being so high. The Battle  of Loos  is noteworthy for being the first time the British used poison gas.

James Spiers was killed on the 25th September 1915, aged 21, and his grave can be found in the front row , second from the right, in the Ration Farm Military Cemetery at Chappelle Armentieres. 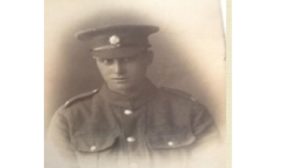 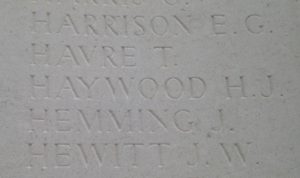 Above is a picture of Harry Haywood in his army uniform.  Harry  was killed with several other men when a large German mine was detonated under the section of front line trench that they were manning.   The explosion buried several men with others on the surface part buried or simply dazed by the concussion.  The Germans lit up the area with a searchlight and continued to machine gun the resultant crater and its surrounds.

Henry James Haywood died, age 19, on the 10th November 1915 , but his body was never found and he is commemorated  at the Loos Memorial to the missing , located in the Dud Corner Cemetery.

As he has no known grave Cleeve Prior Paish Council requested  that the new culdesac off the Close be named in his memory, and this is now called Haywoods Way. 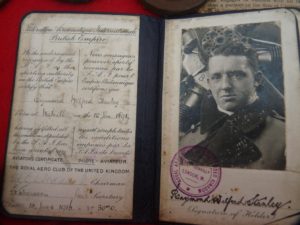 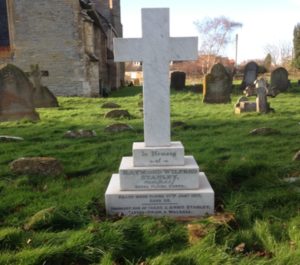 This is a picture or Raymond Wilfred Stanley  found in his Aviators Licence dated 14th June.  To obtain this license you had to prove your flying skills by completing two figure of eight flights over a minimum distance of 3 miles 185 yards. This had to be followed by proving  that you were capable of attaining a height of 100 feet and then landing the plane within 50 yards of touchdown.
He subsequently joined the Royal Flying Corps and underwent his military flying training at Hounslow Aerodrome

There he trained on a  De Haviland DH4.   Wilfred Stanley had just finished his flying training and was about to be sent home on leave before going to a front line squadron in France, when he went up in a more powerful De Haviland DH 8.  Aeronautical engineers did not fully comprehend the power weight ratios of the aircraft at the time and the DH8 proved to be extremely unstable in the air.  According to one of the officers who witnessed the event, he said that it simply seemed to fall out the sky from about a height of 100 feet.

George Brookes, Private S/No 17285 Worcs 10th Battalion, born 1892, his parents were originally from Welford on Avon but had moved to Cleeve Prior by the 1911 Census 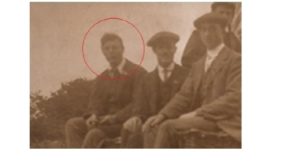 George Brookes is on the far left of the picture.  George enlisted in 1914 and would have gone out to France during 1915 so saw quite a bit of active service with the Worcester 10th Battalion.  He was killed in an area of the Somme were the Sheffield, Barnsley and Accrington Pals Battalions were almost wiped out on the opening day of the Battle of the Somme on 1st July 1916.  We have established that he was killed on a trench raid attacking the Pusieux Trench.

The Pusieux Trench was on slightly raised ground  and was captured, lost and recaptured several times during the war.  On the night in question 11 / 12th February, the Worcester Regimental records states  that  a successful a trench raid took place involving about 400 men.  The author Henry Russell who wrote about the soldiers life after the war and was involved in the raid describes it very differently and he stated that no military advantage was gained by the raid and no new trenches were occupied.  The 10th Worcester’s paid a heavy price for this attack with 4 killed, 13 missing 3 officers and 39 other ranks wounded.  George Brookes was one of those killed on this raid.

He is buried in the Queens Cemetery at Pusieux   and if ever there was a cemetery that epitomises the words out of Rupert Brookes poem   ‘ That there’s some corner of a foreign field that is forever England’   then this is the place for me. 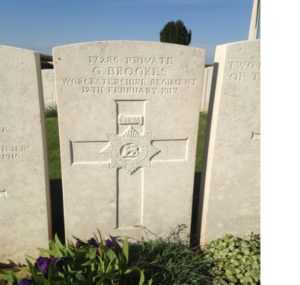 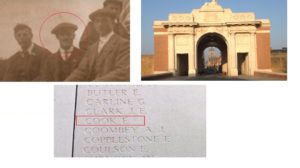 Ernest Cook is the second on the left

We have been unable to establish how Ernest was killed other than the 3rd Battalion was being held in the reserve at the time of his death around the Bedford Farm area, which was slightly south west of Ypres.  This area remained in British hands throughout the war but could be reached by German artillery.  Prior to it being called Bedford Farm it was in fact Chateau de Rosendal.

Ernest Cook’s body was never found but is commemorated on the Memorial to the Missing which is the Menin Gate Memorial in Ypres, his name can be found on Panel 34

As with Henry Haywood the village wished to have a memoial to Ernest Cook, as he had no known grave. The village now have an annual memorial cricket match between Upper & Lower Cleeve, and they play fo the Ernest Cooke Trophy 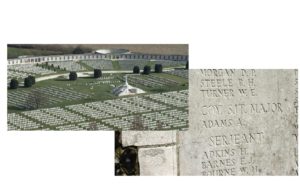 Albert Adams was a career soldier who had also served in the latter stages of the Boer War in South Africa, his rank being that of Company Sgt Major the highest rank a non-commissioned soldier can achieve, and he would have been highly respected.  We are fortunate that Battalion records paint a picture of their move up to the front line where Albert Adams was to lose his life.

They describe how they moved up in the first light of the morning across the duckboards over a muddy morass.

Albert Adams was killed when the trench they were in took a direct hit from a large shell at 6.15am when 12 men were killed, and 5 were missing.  Missing in this sense was that the body was simply blown to pieces or was buried by mud in the aftermath of the explosion.

He is commemorated at the Tynecot Cemetery and Memorial to the Missing which is Britains largest war cemetery. In the foreground you see the individual graves and at the rear you see the inscription on the panel to the missing.

Cecil Prkins was one of the unfortunate soldiers who did not die at the front. He had sent a telegram hom to say that he was returning on two weeks leave, but sadly he never made it.  He was mortally wounded when the billet that he was staying in overnight at Calais was bombed by German Gotha bombers.   Calais  was the main embarcation port for the British war effort and saw increasing number of bombing raids during 1918 following the Spring Offensive.

Cecil is buried at Les Baraques Military Cemetery in Sangatte , Calais.  This is a spacious cemetery and also contains the graves of about 100 or so Chinese men from the Labour Corps who had succumbed to the Spanish Flu. 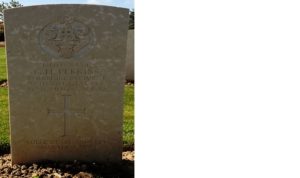 George Oakey  was in the Grenadier Guards which is one of the oldest and arguably one of the finest British Regiments. The 3rd Battalion had been fighting in what was called the battle of the Canal du Nord in between Bapaume and Cambrai when he was killed .

George Oakey was in the front line at a village called Lagnicourt – Marcel when according to battalion diary records  ‘ At 9am a heavy barrage descended on the whole of the battalion front line and all communication wires were cut.  Casualties were, 3 killed and 6 wounded.  Sadly George Oakey was one of those killed. 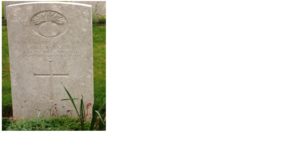 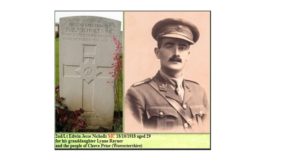 Edwin Nicholls  was killed  during the retaking of the city of Douai  ( DWE ) just 23 days before the armistice was signed.  He won his Military Cross which was awarded to him posthumously and this is his citation which appeared in the London Gazette.

The Citation in the London Gazette for his posthumous award in 1919 of the Military Cross reads as follows:-

Whilst in command of a raiding party at Oppy, on the night of 15th-16th September, 1918, he showed marked gallantry and zeal. His party cleared the hostile positions to a depth of over 1,000 yards. Although not successful in obtaining a prisoner, as the enemy fled from his forward posts, he obtained valuable information of the enemy’s sector and his methods of defence. He remained in the hostile line for over an hour.

Later in the night he was ordered to hold and consolidate the area taken. He went forward with the selected .garrison, but was forced to withdraw on account of strong hostile parties being again in occupation of the hostile positions

He is buried in the Auberchicourt cemetery near Cambrai, his gravestone reads : 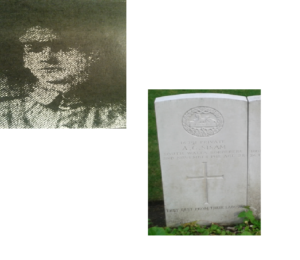 Arthur Sisam had been born in the village, but moved down to Newport in South Wales in 1912 to join his elder brother Jack Sisam working on a large market garden.  He volunteered in September 1914 before going over to France a year later landing on the 25th September 1915

The above  picture is a photocopy of the Evesham Journal,  which reported his death and gave this brief account of his service :

‘ Going to France in 1915 he has been in all the fighting with his Battalion, never been wounded or sick but twice home on service leave.  He left his Battalion on October 25th for fourteen days leave, was taken ill on arrival at London and died from pneumonia.’

He died in the King Georges Military Hospital in London 6 days before his leave ended and 9 days before the war ended.

Arthur Sisam’s grave is on the far left and reads: